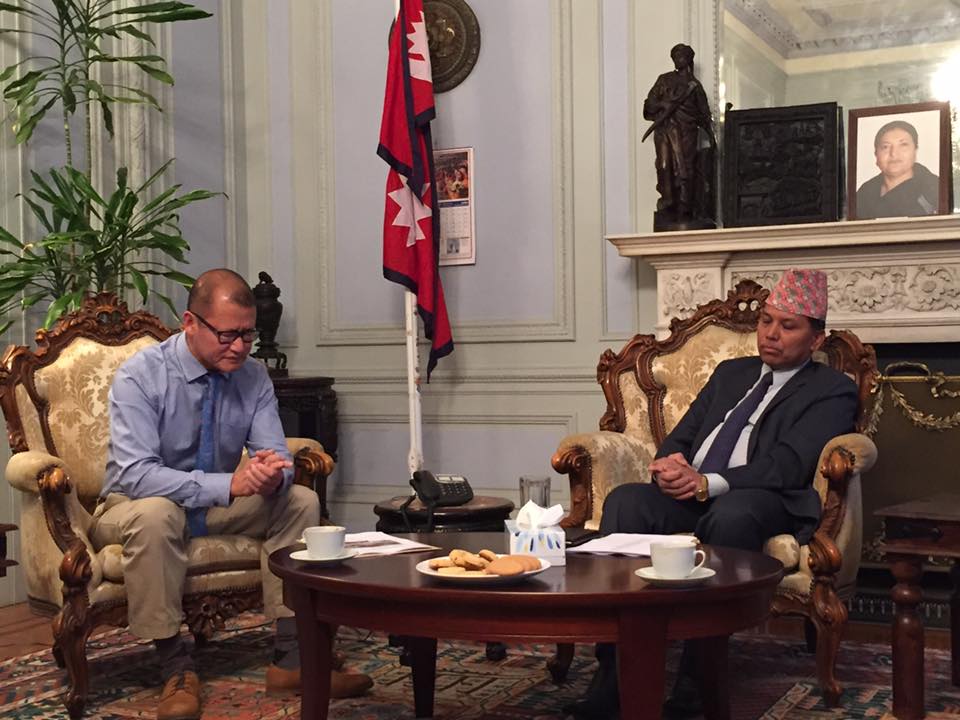 24/11/16 NRNA UK has met Nepalese Ambassador for the United Kingdom Dr. Durga Bahadur Subedi at the Embassy of Nepal earlier today. A team of delegates led by president Muchhetra Gurung consisted majority of office bearers, including Vice Presidents Yog Phagami, Shanti Thapa and Dashu Ram Pandey, General Secretary Bijaya Bikram Lingden, Secretary Phadindra Bhattarai, Assistant Treasurer Lalit Neupane, Spokesperson Khusi Limbu, Youth Coordinator Hari Acharya and Executive Members Rajesh Pathak and Krishna Bhattarai. During the meeting at Kensington Garden that lasted a couple of hours, president Muchhetra Gurung briefed His Excellency the Ambassador Dr. Subedi about NRNA UK’s dream Project Nepal House, a plan to either build or buy a community Nepalese house in the UK. Executive Member Rajesh Pathak, who is also Technical Director for the Nepal House Project, presented a Detailed Project Plan (DPR) to Dr. Subedi. Similarly, Vice President and Nepal House Project Coordinator Yog Phagami highlighted the significance and long term objectives of the project. All in all, NRNA UK expressed its desire to obtain credential and support from Nepalese Embassy for the project Nepal House so the fundraising campaign could be prompted in any part of the UK where Nepalese live. Acknowledging NRNA UK’s expectation in very positive way, ambassador Dr. Durga Bahadur Subedi assured NRNA UK that he and the Nepalese embassy would support to promote the cause in every possible way – be it moral, publicity or similar, if not financial. “The most important things is that NRNA UK has begun this admirable cause; you’re on your way to making a history. Who begins such a cause is more important than what others say. This project will have a long-term positive outcome for all Nepalese living in the UK”, the ambassador expressed his delight. The ambassador also welcomed NRNA UK’s official invitation as Chief Guest on the forthcoming Charity Event of December 26 at Empire Banqueting Hall of Aldershot. The event will also see NRNA President Dr. Shesh Ghale as Special Guest, and NRNA UK hopes that the Charity Dinner would trigger its fundraising activities for Nepal House to a newer phase. During his communication Ambassador Dr. Subedi also highlighted the importance of mutual cooperation and understanding between the embassy and NRNA UK, particularly anticipating that the association would have its say in a fair and form manner whenever the Nepalese embassy does right things. However, he said, if embassy acts in an inappropriate way or has any shortcomings during the course of serving its people, organisations, particularly like NRNA UK and the press, would let the ambassador know before going public so he and his team at the embassy can rectify the situation. Embassy Spokesperson Mr. Sharad Raj Aran, formerly the Acting Ambassador, also observed the meeting. Mr. Aran put forward his view whether NRNA UK’s was considering to take the Nepal House awareness and fundraising campaign beyond South East of England, particularly to major cities other than the capital. To his concern, Spokesperson Khusi Limbu told Mr. Aran that the association is currently in the process of forming its regional committees in Wales, Scotland and Northern Island that would pave a way to spread the campaign across the country soon.

There are no upcoming events at this time.